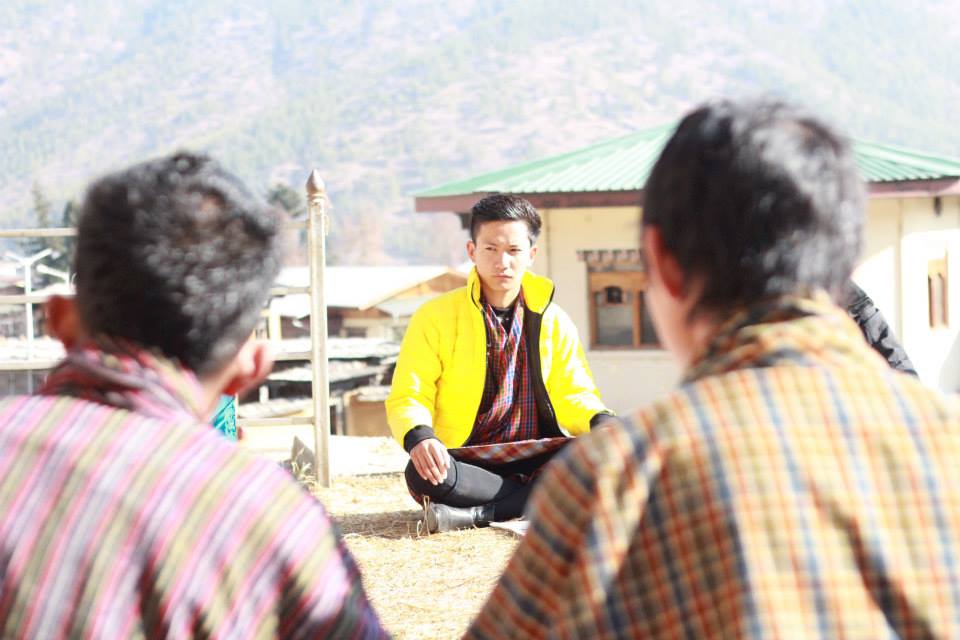 Tenzin Namgay prepares to give his speech on promoting local industry

FRIDAY, JANUARY 17, YDF Hall: After two weeks of intense training, reflection, and research, YIDDD Youth Representatives held a public session during which they deliberated on three resolutions relating to farmers, the disabled, and teachers.

With the session, we aimed to demonstrate to the audience – comprising of 20 representatives from education, the UN, and local government – that youth are capable of engaging in civil conversations about national issues and can come up with creative solutions.

18 of the 19 Youth Reps were present to critically examine resolutions, or proposals, they had formulated in their respective committees during the five-day research period. Each proposal described an issue that the Youth Reps felt needed to be urgently addressed, while advancing a solution and strategy for addressing the issue. Prior to proposal formulation, each committee attempted to understand the issue better through consultation with relevant stakeholders and a thorough literature review. (See the proposals here) 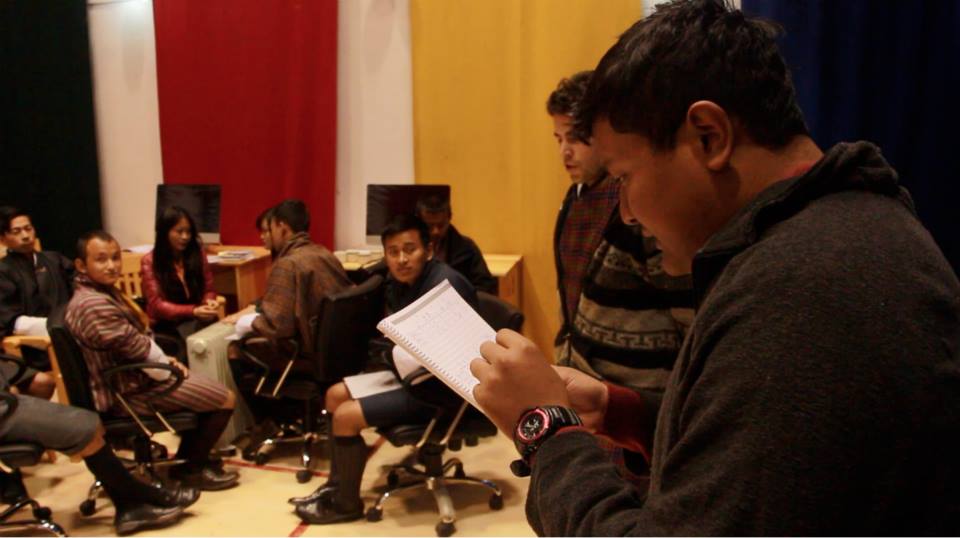 Phub Dorji, YIDDD co-founder, began the session by introducing YIDDD and his inspiration for taking it forward.

“The idea of YIDDD started from the year 2011; however it wasn’t till 2013 that work on forming it started seriously,” he said. “This organization was formed with the fundamental idea that, as a democracy grows, it is important that the voice of every section of the population be included.”

“We hope this project will motivate young people to recognize and take their chances in intervening and participating in the shaping of polices and thus making their voices heard.”

He then introduced the YIDDD speaker, Kezang Dorji, who took over to moderate the debates.

The Community Welfare committee began by issuing their proposal to support local farmers and reduce the import of packaged foodstuffs (popularly known as junk food). The group argued that, due to Bhutan’s negative balance of trade and limited investment in agriculture, it is in the country’s best interests to substitute non-essential and unhealthy imports for healthier alternatives that would support Bhutan’s smallholding farmers. 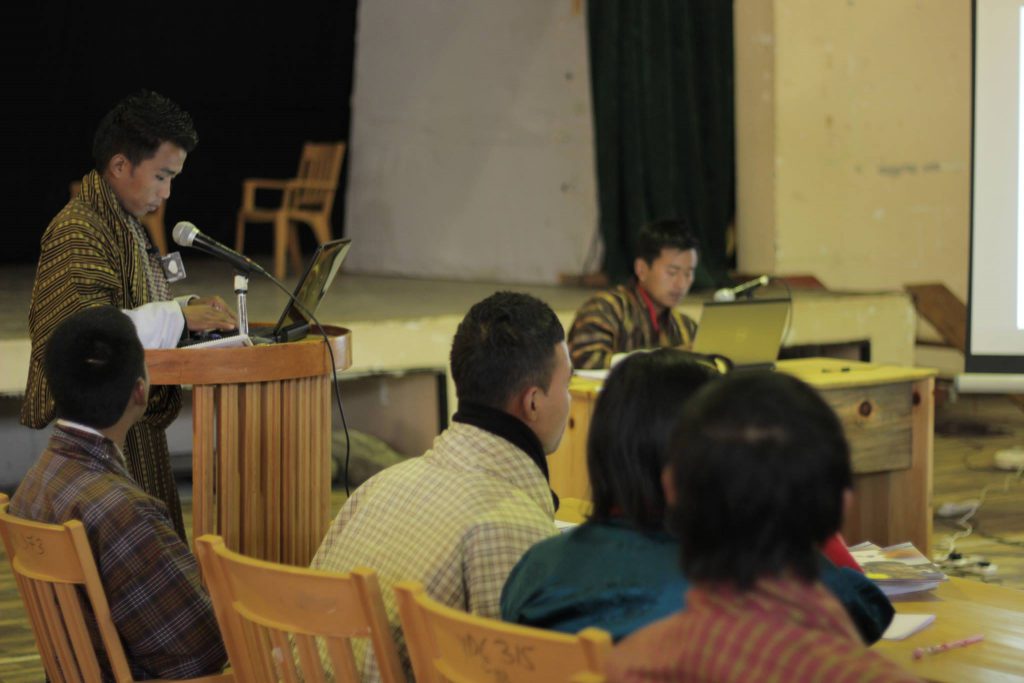 Youth Reps questioned the committee’s means for moving towards a trade embargo on junk food items. Could Bhutanese products be priced competitively with foreign goods made by multinationals? And why should we limit people’s choice?

The committee defended their proposal, while agreeing to assess the feasibility of phasing out junk food items in more detail. After a group vote, the motion passed with 13 votes.

The Social Justice Committee, led by Yonten Phuntsho, then presented their proposal to develop a separate National Policy addressing the needs of persons with disabilities through intervention and engagement in mainstream development. While there has been much progress in the provision of opportunities for those with physical, hearing, speaking, and visual impairments, barriers persist in the form of popular attitudes about the capacities of disabled persons and non-inclusive infrastructure.

Perhaps the most polished of the proposals, the group received limited opposition from the group. The majority of the questions focused on clarifying definitions and the role of advocacy. The proposal subsequently passed with unanimous approval (18 votes).

The Education Committee, led by Ngawang Gyeltshen, rounded out the agenda with their proposal for the establishment of an autonomous Teaching Council that would recruit, retain and motivate teachers. Central to the group’s proposal was their claim that, under the RCSC, teachers were being overburdened and treated like bureaucrats, and therefore required an independent management body to oversee their activities.

Due to the limited definition of the “Teaching Council”‘s functions, the committee met strong opposition from the group. Other Youth Reps questioned the necessity of such a body and how it would improve the quality of education. With only 10 votes, the motion failed with the caveat that the group look at alternative means of recruiting more quality teachers.

At the event’s closure, audience members were invited to offer feedback to the group. Many sang praises for the high level of discourse that the Youth Reps displayed. One audience member commented that it was “like we were watching future MPs in action!” Members were encouraged to not stop at the “planning phase” and to continue to put their proposals into action. 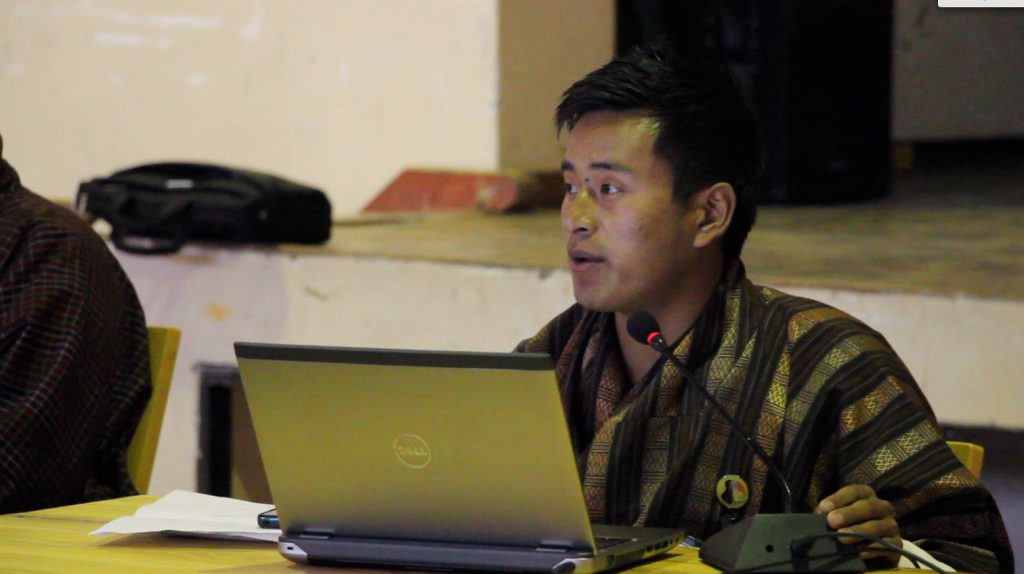 The members will meet throughout the year to see these proposals through.

(See coverage of the event from BBS)

‘Are you a passionate Bhutanese youth who want to make a difference for youths in Bhutan? Do you want to learn how to bring about this change but don’t...

“Quite often, when we ask ourselves this important question of how our future will be, there are some who believe that the road ahead will be bright; others are...

Starting with their 60-second advocacy pitch, the 7th Youth Initiative members have launched their campaigns on various social media platforms so far. After examining the issues from last winter’s review...