Little is known and covered about the contributions of Civil Society Organisations (CSO) towards a nation-building. Many still misunderstand CSO as one of the government entities mostly either because of ignorance of the people or because it fairly is a new organisational concept to the country largely dominated by governmental support.

But CSO Fraternity is making a consistent effort to reach out to a larger audience and create awareness of civil society. Last year, CSO fraternity has come up with an annual event called CSO Fair. This year, maintaining the previous year’s theme “Celebrating Civil Society,” over 33 CSOs including the Mutual and Public Benefit Oganisations came together to mark the event on October 13-14, coinciding with the Royal Wedding Anniversary of Their Majesties. 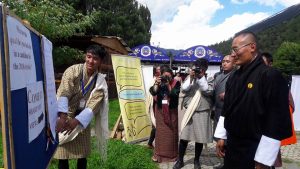 During the two-day fair, CSOs displayed some of their products to generate some revenue through the sale of their products. While few CSOs like Bhutan centre for Media and Democracy put up on sale some of its publications including, The Druk Journal, Monarchy, and Democracy in 21st Century, other CSOs like RENEW, Tarayana, and YDF tried to sell some of their handicraft products. Lhomon displayed some of its bags and purses made from the recycled pet bottles and plastic wrappers.

The event also conducted a photography contest on the themed “Our Gyenkhu” translated in literal meaning as ‘Our Responsibility.’

Adolescents from monastic schools, schools, and out-of-school of ages between 14-19 underwent a five-day ‘Basic Photography Training’ with five members of Civil Society Organisations (CSOs) from October 17-21 at Nazheon Pelri in Thimphu.

The training was held at Bhutan Centre for Media and Democracy (BCMD) media lab at Nazhoen Pelri.

BCMD in collaboration with UNICEF conducted the training to give adolescents including monks and nuns an opportunity to learn ‘Basic Photography’ to be able to express themselves and record issues and concerns affecting their lives and society at large. According to UNICEF, adolescents make up to significant percent of the total population in the South Asia. But despite its huge population, adolescent views, voices, and opinions are hardly represented or are largely ignored during the decision-making process, governance, and development.

Nuns and monks were trained in ‘Basic Photography’ for the first time making it into both national television, BBS and newspaper, Kuensel

UNICEF has been using training in ‘Basic Photography’ as one of the many ways to empower and enable adolescents to record and document issues and concerns affecting their lives. A total of five nuns from Drubthob Thangthong Dewachen Nunnery and five monks from Dechen Phodrang Lhakhang participated in the training. All the monks and nuns were between the age group of 14-19.

A batch of 10 out-of-school students and school-going students from schools of Thimphu and Paro also attended the photography training. Nuns and monks alike expressed their joy in having been given the opportunity to participate in the training. “I really enjoyed using the camera and meeting new people and interacting with them while taking pictures,” a nun from Drubthob Thangthong Dewachen Nunnery, Tshetrim Wangmo said.

A monk from Dechen Phodrang Lhakhang (Monastery), Tshering Dorji said that though he was initially quite cautious and worried for the safety of the camera, he later enjoyed the training thoroughly. “I want to keep learning photography. I want to be able to make some income through the sale of my pictures, in the future,” Tshering Dorji said.

The villagers of Tilikaysa in Shaba under Paro no longer have to drink the contaminated water since Shaba Higher Secondary School (SHSS) has successfully protected and preserved the village’s only drinking water source, a small spring water above the village.

SHSS completed the protection and conservation of the spring water at Tilikaysa on October 21. 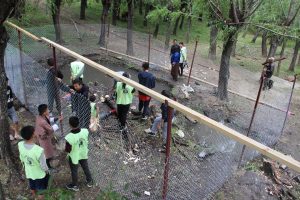 The protection and conservation of the spring water was one of the local action plans proposed during the community mapping earlier in the year from  the schools and colleges in Paro. Since the spring water is the only source of drinking water for the 12 households, SHSS proposed for its protection and conservation, as it was left unprotected. As a result, domestic livestock such as cattle and dogs straying into the source led to contamination of water, which the 12 households used not only for laundry and chores but drinking, too. Using the water for drinking made the villagers and their families vulnerable to water-borne illnesses.

But following the implementation of the local action plan, students and teachers of SHSS has fenced and roofed the water source using mesh wire and Corrugated Galvanised Iron (CGI) sheets in a shed. Following the protection, the villagers were happy and relieved with the fact that now they have access to safe drinking water.

The participants of the community mapping from the SHSS will present their learning experiences and project impacts to the Paro Town Committee Meeting in November.

Bhutan Centre for Media and Democracy (BCMD) trained 30 students of College of Language and Culture Studies (CLCS) from October 28-30.

The three-day training focused on the production of radio programmes including, news, drama, advertisement, advocacy, and announcements, among others. The participants were also trained in radio technology and software.

The training was conducted to recruit new members to CLCS campus radio, ‘Rigzhung Lungta’ for the long-term sustainability of the community radio station, which covers most of the gewogs including, Drakteng, Tangsibji of Trongsa Dzongkhag (District). Trongsa is one of the remote districts in central Bhutan, which is about a daylong drive from the capital, Thimphu. 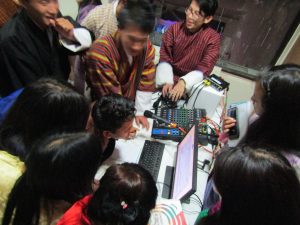 The training was also conducted in hope that the new members can further help BCMD in training more students of the college in the radio programme. This cohort of newly trained students will run the Rigzhung Lungta 91.1FM.

CLCS media club coordinator, Younten on behalf of the new members expressed their gratitude to BCMD for the workshop and for providing the club seed fund.

“We are working hard and look forward to BCMD’s continued support  Younten said.

Rigzhung Lungta was established in July, last year, with support from BCMD and Swiss Development Cooperation.