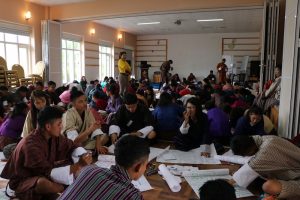 Students learn how to start change at an individual level.

Students from 23 schools across Bhutan presented six proposals for action at the end of the 5th Youth Summit, “Change Begins With Me” held at the Royal Thimphu College in the capital city Thimphu from 11-14 July.

A total of 117 youths of schools from Dagana, Zhemgang, Samtse, and the Royal Academy  conceptualised action plans that they would take on on issues such as:

“From the outside, it always looks so good (referring to society and mental health situations ) but from the inside, it is terrible. It’s full of fear. I and my friends want to create a more positive society by helping to spread awareness of mental health. We always tend to show that things are alright, but many youths face anxiety and challenges…,” said a student from Gomtu Middle Secondary School.

The summit was facilitated by 12 youths mostly from colleges who were trained in peer facilitation to co-facilitate with Bhutan Centre for Media and Democracy. UNICEF Bhutan funded the Youth Summit. 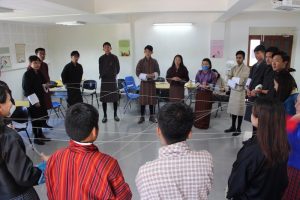 Youths learn research at the policy level and its effectiveness, challenges, and shortcomings.

As a follow up to the Winter Youth Initiative in January, 21 college-bound and out-of-college youth presented their research paper findings on a number of issues at the Summer Youth Initiative held from 2-5 July at the Royal Thimphu College.

A 21-year-old college student from Thimphu said she had stopped being just somebody who complains and became one ‘who would change what I want changing’. Another participant remarked that he has gained the confidence to ‘influence the society and make a huge difference’. CISU supported the summer YI camp. 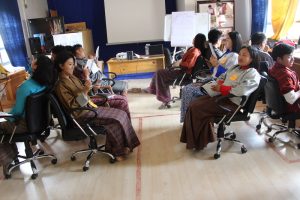 Participants learn communication exercises as they prepare for co-facilitation.

Twelve YI participants with demonstrated leadership potential and interest underwent facilitation training to co-facilitate the Youth Summit expected to be attended by over 100 youths from around Bhutan.

In the interest of collaboration, two youths from the Youth Centre in Paro were also trained in facilitation skills so that they could carry out a step-down activity at their centre. At the Youth Summit, the peer facilitators took charge of a groups of high school students and facilitated their activities and sessions aimed at enabling participants to become more active citizens.

In so doing they were successful in creating an empowering and open space which engaged their heads, hearts, and hands. “I tried to be fair during the involvement/discussions by letting the less spoken, speak up and gave more attention to those who were quiet and silent,” said Sonam Pelmo, a college graduate from Thimphu.

It was a demanding responsibility, and more importantly, it enabled the young facilitators to learn one of the most important skills of democracy — that of listening, giving voice and being inclusive. This has been made possible with support from CISU.

Bhutan Democracy Forum 2019 was broadcasted on 29 and 30 July on the Bhutan Broadcasting Corporation and its proceedings printed for distribution to schools, colleges, and institutes to facilitate discourse on Bhutan’s evolving democracy.

The programme screened on 29 July featured representatives from all four political parties — Bhutan Kuen-Nyam Party, Druk Nyamrup Tshogpa, Druk Phuensum Tshogpa, and People’s Democratic Party.  The second programme on 30 July featured citizens — an academic, a local leader, media, a member of the National Council and a journalist to get people’s perspectives on the political landscape.

A publication on the two forums held in 2018-2019 is being distributed to schools, colleges, and institutes.  Thanks to the DIPD for support in making the forum possible in partnership with the ECB’s Bhutan Democracy Dialogue. 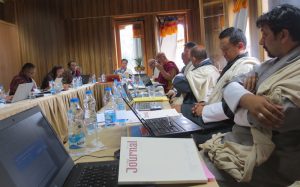 The Druk Journal conversation on the issue “Educating Bhutan” took place on 29 July with members of the academic board of the Royal University of Bhutan.

Presidents of colleges and RUB staff members discussed issues related to education, including the need to have more evidence-based quantitative research to feed into government policy. Presentations were made by 3 contributors to the edition of the DJ raising pertinent issues relating to education.

The president of the CLCS, Lopen Lungten said that Bhutan’s education system is paying much attention on feeding the intellect, and now’s the time to pay attention to what he called “pracademics”  — to share some practical, critical thinking skills alongside the emphasis on academics. Presidents of 11 colleges across Bhutan listened to the views of several contributors to the Journal and shared their views summarised in brief:

The Druk Journal is encouraging colleges within the RUB to carry out regular discussions and encourage discourse using the journal’s themes. This edition of the journal contains articles by 15 contributors.