Being the change-maker in democratic setup 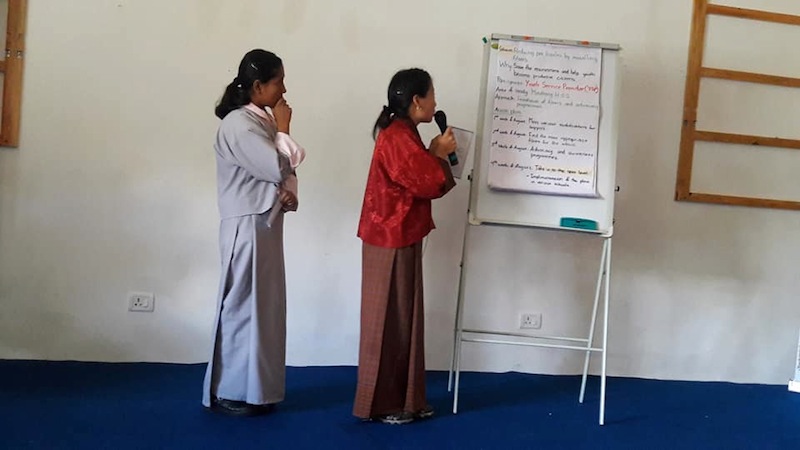 Students from Gomtu and Norbuling present their project on the final day of the Youth Summit.

Thimphu, 14 July: Participants of 4th Youth Summit (YS) proposed a number of projects to tackle rural-urban migration, promote the waste management, empower women, and promote organic food production in their communities. Students will try to implement these projects through fundraising in their respective project sites.

The Youth Summit is BCMD’s annual event to engage young minds during summer vacation to supplement the government’s efforts to nurture socially conscious and responsible citizens.

This year, over 115 students and teachers from a number of schools colleges in the country attended the Summit with the theme: “Be the Change” held at Royal Thimphu College from 11-14 July. Among them were recent graduates and out of school youth. BCMD also trained 12 youths to facilitate the summit with support from four teachers.

Many students from Gomtu Middle Secondary School (GMSS) in Samtse and Yebilaptsa Central School (YCS) in Zhemgang were in the capital, Thimphu, for the first time. Some of the students from the two schools come from villages without access to roads. Six of the total 10 students from GMSS are also single-parent children from economically challenged families.

“We brought students from these places since we wanted to give an opportunity to the underprivileged,” said a teacher from YCS Ratna Bdr Dahal.

On the final day of the summit, participants including a number of students from YCS and GMSS presented projects their groups planned to tackle issues in their communities.  Two groups including Yebilaptsa Central School from Zhemgang proposed production of compost from food waste in schools and colleges. “If making compost from kitchen waste in schools and colleges is successful, we can expand the project to the national level,” said one of the group members.

The other groups will work on reducing rural-urban migration and women empowerment through advocacy on women health and hygiene and distribution of sanitary pads. Another group will advocate waste reduction through promotion of the use of filter water to bottled mineral water.

“We will also bring success stories of people who have returned to the villages to inspire and encourage young people to live in the rural backwaters,” said the group’s presenter, Kinley Namgyal from Motithang Higher Secondary School.

Speaking to BCMD, both students and teachers agreed that Youth Summit really helped youths reflect on their role as a young citizen. “Through interaction with National Commission for Women and Children director I came to know that I can be instrumental in reducing child abuse in my community,” Tsheyang Lhazom said.

Laxuman Bista said that he’s seen a dramatic improvement in students from his schools. “These are children I have never seen participate in debates or quiz while in school and four days after bringing in the summit – they were making presentations to over 100 people. That’s the greatest achievement they have achieved,” Laxuman Bista said.

Apart from learning to exercise voice, participants learned to explore the values of diversity, inclusiveness, and the role of citizens in a democracy. We thank UNICEF Bhutan for being a valued partner and for supporting this workshop. Catch some of the action at the Summit on a short film soon on BCMD’s YouTube.

Paro, 4 July: Around 90 people from Paro including the mayor, and representatives from the Dzongkhag (District  Administration), thromde (municipal office), the business community, local leaders, and residents came together to frame a vision for Paro Town on July 3-4.

During the exercise, a resident and an artist by profession from Paro Tshering Penjor called for an urbanisation balanced with preservation of environment, wetlands, culture, and tradition. His vision for Paro town is the one based on the Buddhist principle of Umi Lam (Middle Path) and that he said could be a GNH approach to urban development.

“Town development need not be stalled because of paddy fields and the paddy fields need not give way to concrete buildings. Paddy fields change colours and last for almost nine months. It can be natural and more sustainable beautification of the town than planting potted plants that require maintenance,” Thinley Penjor said.

He said the town could grow along the riverbanks connected by Bazams. “And the heart of the town can be social space for residents and pedestrians to hang out with families and friends — free from the traffic,” he said. 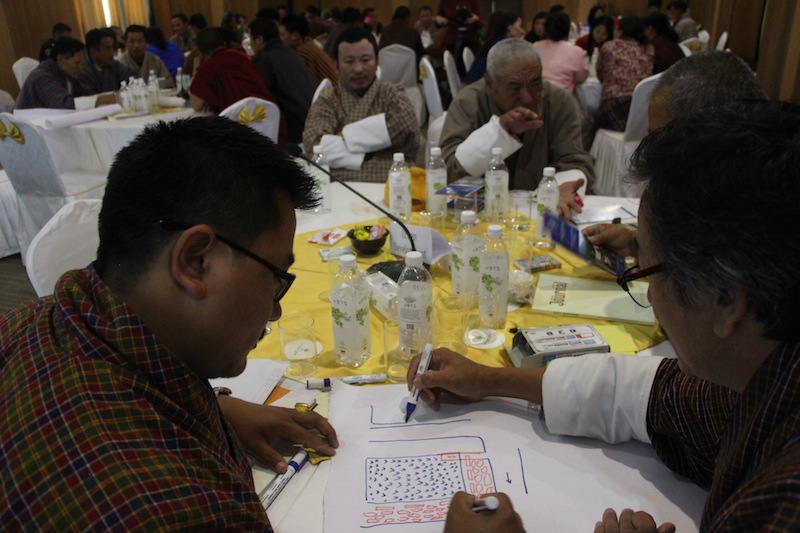 Residents and planners discuss on a vision to balance urbanisation and sustainability.

Another resident pledged to work with youth: “ I have undergone rehabilitation for addiction and am now ready to work with youth. From the bottom of my heart, I would very much like to contribute to this town and its youth.”

The visioning exercise was conducted to model inclusive, participatory, and democratic approaches to making decisions for citizens and planners in partnership with Paro Dzongkhag (District). In this particular exercise, both citizens and planners experience a shift in thinking. They learn in the process to become “proactive” in exercising their ‘citizen voice’ and engage with planners, policy makers, and leaders from being “instruction-driven”.

It is hoped that the exercise would help the town come up with a vision and mission statement for Paro town that would enable relevant organisations, including civil society organisations and residents, to think about how they and their agencies can contribute towards the common vision for Paro town. This exercise is part of the Building Community project that BCMD is leading to pilot a more democratic approach to town and community consultations and development.

We thank the Paro Thromde and International Ideas for supporting our efforts in Paro.

Paro 17 July: Community Mappers in Paro town shared their findings and recommendations on what can be done to improve the communities in Paro following their three-day training in community building.

Bhutan Centre for Media and Democracy (BCMD) conducted Community Mapping training for 22 teachers, youth, and civil society organisations (CSOs) members. Community Building is an asset-based approach that enables members of communities and youth to resolve issues at the local level with the use of skills, resources, and knowledge at disposal in their communities. This strength-based approach to community development helps citizens become more socially conscious about issues at their community level and encourages them to be more engaged as citizens in governance.

This year’s mappers visited a number of communities in Paro to interview residents and listen to diverse stories to understand issues and strengths in communities. As part of an exercise, participants visited vendors in the locality to understand the issues that hawkers, who are mostly farmers from nearby villages, face while marking their farm produce. 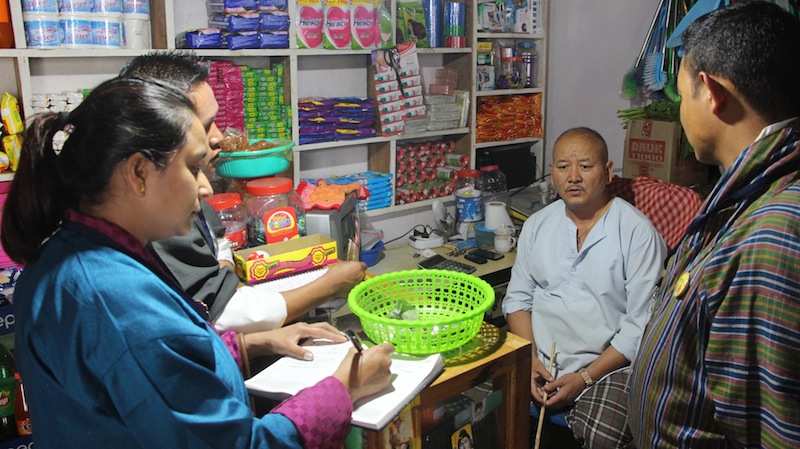 Mappers interact with a shop owner in Paro Town to understand issues.

During their reflective sessions, participants shared their thoughts on the issues our generation is facing. A student from Karma Academy Tenzin Thinley said ours is a dependent generation. He said that farmers depend on government for compensation when their crops are damaged while and youth expect the government to create jobs for them. “As a generation, we do not try to create opportunities for ourselves but expect to be rescued,” Tenzin Thinley said.

A teacher from Karma Academy, Dechen Wangmo said that our generation is a generation of “love and hate” as she sees discriminatory and confrontational remarks on social media but is heartened at the same time because Bhutanese come together to support each other in times of need transcending differences. “Democracy gives me hope because democracy gives us equity and justice,” Dechen Wangmo said.

BCMD looks forward to working with Paro Thromde to take this further in our continuing project – Building Community in Paro — piloting more participatory approaches to urban change and development. Thank you International IDEA for supporting the initiative.

Collaboration for a Cause: Blood Donation 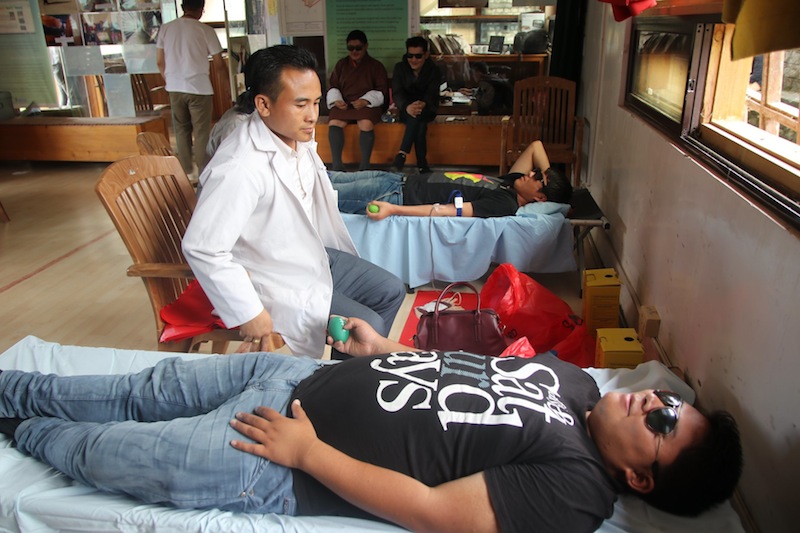 Among the donors were visually impaired youths living in Thimphu.

In a move to support a good cause, encourage and motivate youth, Bhutan Centre for Media and Democracy (BCMD) provided its Media Lab to Gokab (Youth Dance Group) to organise a blood donation camp on 21 July.

Over 20 donors including youth donated blood to the nation’s blood bank that will go on to save a number of lives.
“I came here today because I saw a post on the Facebook. If someone’s life is saved because of my blood then I would feel very happy,” said one of the young donors Sonam Tobgay.

Gokab in collaboration with the Thimphu hospital’s Blood Bank organised the blood donation camp to show that the group’s mandate extends beyond dance. Gokab is also about engaging youth in other noble cause like saving lives through blood donation. The blood donation camp also created awareness on the health benefits of donating blood and helping those in need.

Thimphu 5 July: In a move to enhance the knowledge and skills youths acquired during the winter Youth Initiative (YI) Camp last year, 24 youths from various schools and colleges participated in Summer YI Camp from 5-7 July at Media Lab in Nazhoen Pelri Complex.

Last winter the youths from different schools and colleges with diverse backgrounds attended seven-day residential training to reflect on their role as citizens. In the following months of the training, the participants initiated and implemented a number of Local Action Plans in their schools, colleges, and communities.

This year, the three-day camp focused on News and Media Literacy and news report writing. They also presented their Local Action Plans on the first of the camp. 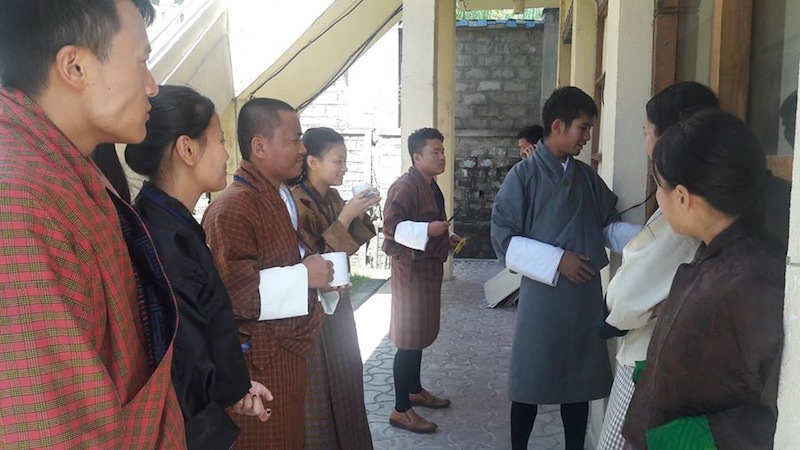 One of the sessions of the summer training guided the participants through an interactive activity to reflect on what it means to be a good citizen.  At least 21 of the total 24 participants agreed that the activity helped them understand their strengths and weaknesses better. “I learned that I have the capability to accept all diversity of people and love them for who they are,” said a graduate from Sherubtse College Shanti Limbu.

Participants most of who are media savvy also found News and Media Literacy useful and educative to learn about online behaviour. A student from the College of Natural Resources (CNR) Pema Norbu said that after attending the Media Literacy he will always ‘think’ before posting or sharing anything on social media. “Besides that, I can also now distinguish news from the fake news,” Pema Norbu said.

Another participant from Gaedu College of Business Studies said that he learned that not all the information such as promotion and the raw information is news. “The Media Literacy taught me that we should not buy everything we read and see online and on television but use our judgment to discern the credibility and reliability of information,” Yeshi Nidup said. BCMD would like to thank UNICEF Bhutan for funding the YI Summer Camp. The participants also learned news report writing. UNICEF Bhutan supported the summer YI Camp. 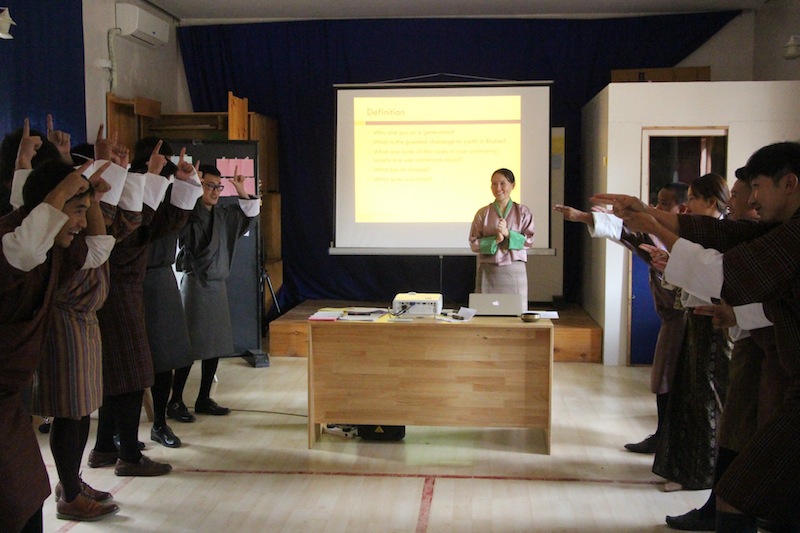 In a two-day training, YI members mostly youths from schools and colleges learned appreciative inquiry to facilitate Youth Summit slated for July 11-14 using positive probing questions to prompt reflections, imagination, and story sharing. The participants also learned the use of a contextualised version of Palmer’s Habits of the Heart to generate reflections and discussions around values of citizenship.

Besides learning coordination and co-facilitation, the peer facilitators learned the use of icebreaker, grouping, debrief, and organisation of ideas. Following the training and successive facilitation of Youth Summit participants was positive about their experience. They discovered a lot of new things about themselves and teamwork. “I learned to patiently engage with a variety of children of different age groups without sharing my personal opinion to influence them,” said a high school graduate, Peme Tashi.

A 2nd-year student from Sherubtse College, Tenzin Dema Lepcha said that the training and opportunity to facilitate YS boosted her confidence. “I discovered that I have the capability to interact with new people and work well in a team. I feel confident enough to lead sessions for youth in the future,” said Tenzin Dema Lepcha. BCMD would like to thank UNICEF Bhutan for supporting Peer Facilitation.