Photography Is a Language Without Words 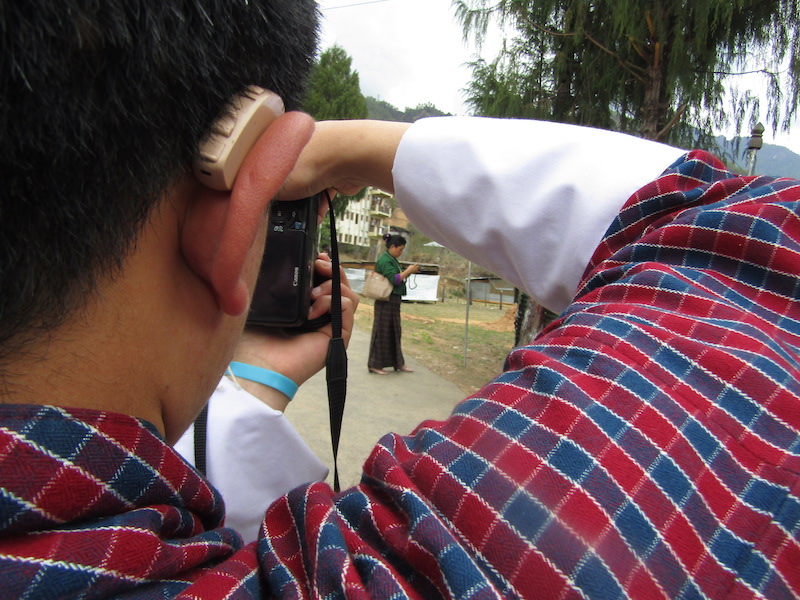 The recent NatGeo Photography Camp in Thimphu and Punakha continues and travels to Wangsel Institute in Paro Dzongkhag (District) for the Hearing Impaired in Paro to empower 12 members of the Media Club.

The two-day training offered lessons in basic composition, framing, ethics and caption writing which gave the participants a theoretical basis on which to go out into the field and take photographs that tell compelling stories.

“They are visual learners and communicators but have been left out in opportunities to develop their potential skills. Since photography needs no words, they are able to express how they see the world through a frame much more fully,” said Sonam Wangmo, the media club coordinator who is also a teacher at Wangsel.

The training will culminate in a photography exhibition at their school where they will invite other media clubs from Paro Dzongkhag (District) to celebrate their work and see the world from their viewpoint. NatGeo supported the photography training for people with disability.

In what appeared to be the first such forum following the 3rd Parliamentary elections in 2018, Bhutan Democracy 2019 brought together politicians and members of the academia, students, civil society, civil servants, representatives of Constitutional agencies to talk about ‘Democracy as a path to Good Governance’ on 30 April.

Representatives from the four political parties, Bhutan Kuen-Nyam Party, Druk Nyamrup Tshogpa, Druk Phuensum Tshogpa, and People’s Democratic party represented their parties at the forum. The second panel of speakers consisted of an academic, a gup (Local Leader), a journalist, and a Member of Parliament from the National Council.

The representatives of the political parties touched on the trust between the people and the government. They also discussed whether the media in Bhutan is becoming sensational and has become part of the problem or is providing solutions. Women representation in politics, corruption, youth, and the complexities of being “apolitical” were some other pertinent issues covered during the discussions. 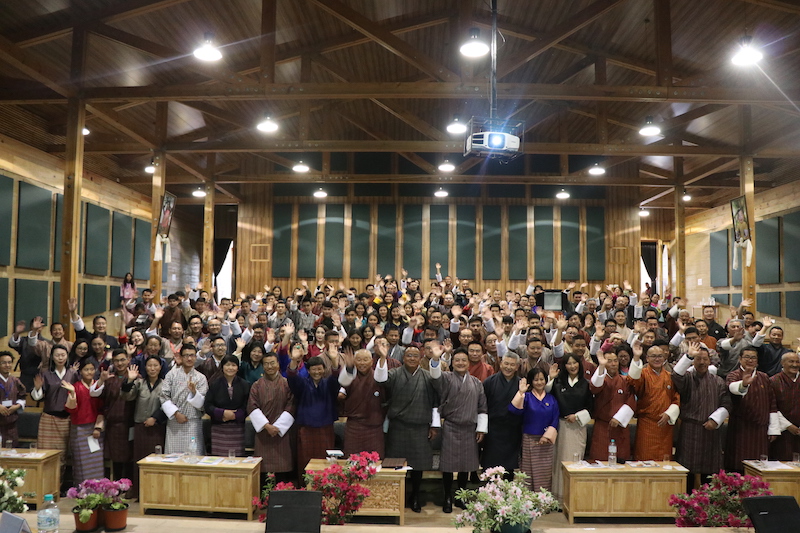 Participants at the forum before breaking for tea break.

The forum highlighted the need for the government to improve access to information to people living with disabilities particularly, those living with hearing impairment. “The government can look into possibilities of using subtitles for the important political debates during the elections since we learn through visuals, which can help us make an informed political decisions,” said Sonam, an instructor from the Wangsel Institute or the hearing impaired whose student use signed language to say that they felt inadequately informed in the 2018 elections as they could not understand the broadcast debates amongst parties.

Another panellist, Nubi Gup Ugyen Tenzin stressed on the need to strengthen Local Government for good governance since it is considered the least preferred jobs for the Bhutanese in general.

“I request all youth here, after your degree, you are welcome to the rural areas. We have lots of jobs for you. Please don’t look towards civil service and business, come back to your villages. We will work together – form a good team. You will grow up from a local government to a national leader,” said Ugyen Tenzin from Trongsa District.

Several participants acknowledged the need for such open forums to take place to discuss issues of importance.

The forum supported by DIPD and conducted in partnership with the Royal University of Bhutan and the Bhutan Democracy Dialogue was attended by over 200 people including civil servants, college students, aspiring politicians, former ministers. We thank the four political parties for making this a lively forum. 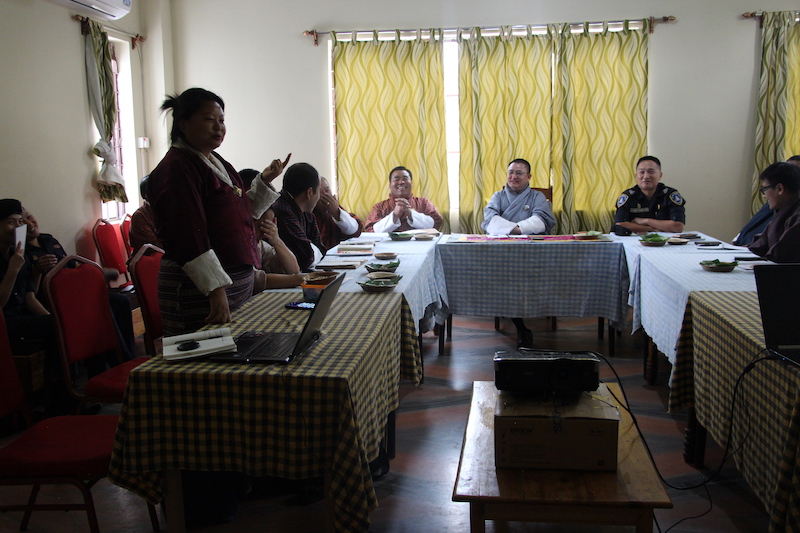 A member shares her thoughts at the meeting.

Samdrup Jongkhar town was abuzz with ideas and deliberations on what the future of the town could be like. Members from various government agencies and stakeholders attended the Samdrup Jongkhar Town Hall meeting on April 15 to share experiences gained from previous community mapping programmes and projects. The members deliberated on and endorsed a Terms of Reference for Town Committee members. This is the first town hall meeting for Samdrup Jongkhar for the year.

On 16 April, a BCMD-led Visioning Workshop followed the meeting.  The visioning exercise explored the challenges and strengths of Samdrup Jongkhar Town through a prism of themes like urban development, youth matters, health, safety and well-being, women and children, and the environment.

Through group discussions and activities, the exercise developed vision, mission and strategy for Samdrup Jongkhar town. Many participants attending the forum for first time commended on how it helped change their perspective towards decision-making process and active citizenship.

Following the visioning exercise, 24 youths of Menchari and Rikhey were trained in community mapping projects for four days at Dewathang. During the training, youths charted out their community issues and discussed what viable projects could be achieved this year.  The vision mission exercise was conducted in collaboration with the Samdrup Jongkhar Initiative.

BCMD acknowledges the support of the UNDP, International IDEA and other partners in spearheading the Building Community Initiative in Paro and Samdrup Jongkhar. We are especially appreciative of the municipal offices in the two towns that are active partners in testing a process of citizen participation and more inclusive decision-making in local town development. We’re looking forward to activities in the months ahead.

Sharing Our Work With Bhutan’s Parliament

Bhutan Centre for Media and Democracy shared our work, mission and results of our activities with members of Parliament in a half-day meeting with civil society organisations on Tuesday, 29 April.

The meeting included a networking session where members of the various parliamentary committees visited the stalls set up to share CSO work.

In speaking with BCMD, parliamentarians inquired about our challenges and about our work. We also talked about how we could work with various partners in the coming years.

In the following session, BCMD also shared with a plenary of National Assembly members and CSOs on the civil society experience and its value in building citizen engagement. 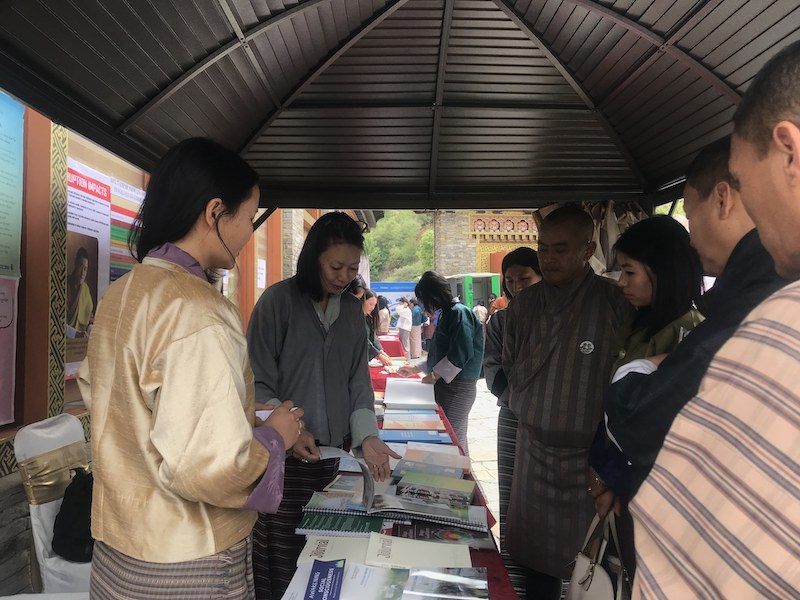 The MPs visit BCMD stalls at the National Assembly.