Bhutanese economy should move from resource-driven to productivity-driven

Posted by Bhutan Centre for Media and Democracy, May 31st, 2022 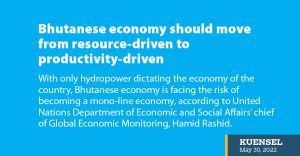 With only hydropower dictating the economy of the country, Bhutanese economy is facing the risk of becoming a mono-line economy, according to United Nations Department of Economic and Social Affairs’ chief of Global Economic Monitoring, Hamid Rashid.

“Productivity-led growth is a good hedge against volatile economic growth,” said the chief who was a panellist at the Bhutan Democracy Forum which discussed “Equitable prosperity through inclusivity” last week.

The pandemic has adversely affected the economy, impacting all aspects of societal equality and the national debt of the country stands at 130.9 percent at Nu 247.68 billion of its gross domestic product (GDP) in first quarter of 2022.

Hamid Rashid said that a resource-driven economy dictated by one or few resources tends to be volatile and vulnerable. “The productivity-led growth is more resilient, inclusive, and equitable which Bhutan needs to prioritise and pursue.”

He claimed that productive growth can be stimulated by adding labour, capital, and more efficiency to the economy. Hamid Rashid said Bhutan should have policy and discussions to identify productivity-led sectors to achieve and sustain steady economic growth.

He said that Bhutan saw economic growth of 6 percent on average over the last 30 years which is slow compared to countries of similar economic structure and size. “Bhutan’s economic growth is volatile because having a standard deviation of growth over average growth, the volatility of 0.76 is significantly higher than other countries of the same economy size. “The swaying growth for a small economy is not a very stable economic growth.”

Hamid Rashid said economy of least developed countries grew in 2020, while the South Asian economy contracted by 5.7 percent, India by 7.5 percent, and the global economy by 3 percent, but Bhutan’s contraction was by a large margin. Bhutan faced more global shocks because of the tourism and trade sector in 2020, he noted.

The high external debt, he said,  is an additional source of vulnerability. According to him, if growth rate averages 5 percent during the next decade, the debt to GDP ratio would exceed 200 percent by 2030 and at that point it will slow the economic growth and sudden shocks will exacerbate debt sustainability risks. “There is a need for planning and policy considerations.”

Hydropower export, Hamid Rashid said, undermines other exports and economic diversification. “Hydropower’s share in total exports saw a significant increase from 33 percent in 2011 to 57 percent in 2020, but the share of non-hydro power export decreased from 25 percent to 11 percent. It deteriorates the country’s balance of payments.”

He said that in GDP calculation, the net exports are a major contributor to economic growth. “However, it has not improved while imports have increased significantly.” On the other hand, he said that the agricultural sector employs nearly half of the workforce and is the least productive sector in the Bhutanese economy.

The hydropower sector employing about 4,000 people generated over USD 300 million of gross value added in 2020.

He also said that the productivity also stagnated in the tourism and hospitality sector and was low in the wholesale, retail, manufacturing, and transportation sector.

Another panelist, the director of Macroeconomics, Research and Statistics of the Royal Monetary Authority, Gopal Giri, said that without hydropower, the economy would have contracted much lower than 10.1 percent and the central bank projected at -25 percent.

He said that the Bhutanese economy still faces challenges being an import-driven economy and faces twin deficit problems, which are high current account deficit and internal deficit and Bhutanese Ngultrum being pegged with the Indian currency.

Gopal Giri said that deficits were experienced since the first five-year plan.

However, he added that the government is trying to inscribe economic policies and options and push the driving factors of growth in the 13th Plan.

According to him, the three triggers of the Bhutanese economy are the government’s capital expenditure, hydropower and private investment.

He also said that the private sector is at a nascent state and the bureaucratic and licensing processes make it tighter and even deprive access to finance since banks find it risky.

“Economic diversification is one of the solutions but it is very important to know the alternative sources of growth besides hydropower,” Gopal Giri said.

He added that more than 60 percent of the sectoral loans comprise the imports and consumption loans, which would be not helpful.

He, however, suggested that these resources have to channeled to productivity growth sectors that generate employment.

He also said that the central bank does not have capital control and cannot pump as much liquidity into the economy because of the currency being pegged. “If the peg is distorted, we might have to pay more for hydropower debt.”

Gopal Giri suggested that financial inclusion and literacy could play an important role where an individual and country can become financially independent.

The forum was held by the Bhutan Centre for Media and Democracy in collaboration with the Royal University of Bhutan.

Find the article on Kuensel here